Put A Soc In It!: Trampolining

My latest exploits can be read about here...


Having established last week that watery depths don’t exactly float my boat, this week I took on the opposite extreme: the dizzying heights of trampolining.
Unfortunately, I hadn’t quite anticipated the preparation my body would require in order to withstand two hours of being bounced in every direction imaginable. Having got a little carried away with the G&Ts the night before, I arrived to the class with my head already spinning, and ten minutes in I was forced to remember what I’d sworn to forget: the kebab I had consumed in the early hours of the morning was threatening to make a rogue reappearance.
Noticing that I had turned a shade of green, our coach took the opportune moment to suggest I let someone else have their turn while he explained to me the secrets of avoiding unwelcome ‘giddy spells’ Thinking it best not to mention that takeaway binges probably aren’t top of the list, I listened attentively. On my next turn, I even pulled off a ‘seat drop’; as one of those ladies who likes the extra cream with their pudding, I had no trouble allowing the weight of my rear end to propel me downwards. After a few attempts I had the move nailed, and the coach looked reasonably impressed. 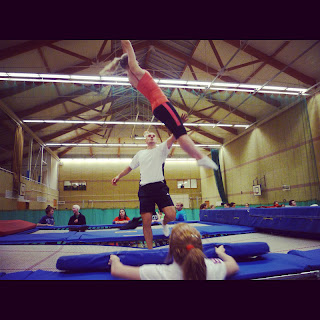 Now it was time to move on to more ambitious territory. A ‘front drop’ was proffered, but, given my rather delicate state, I asked whether there might be something a little less tough on the tummy. We settled on a ‘back drop’ instead: all I needed to do was jump as high as possible then lean my shoulders back, and I would float gently down to a lying position on the bed. Or something like that.

It might sound crazy, but soon I was actually beginning to enjoy the feeling of flying up and falling back down, only to spring back and repeat it all over again. With each turn I dared bounce that little bit harder, shoot my arms that little bit higher, fall back that little bit further… Then something staggering happened. The coach told me to repeat exactly the same move, only lean backwards a bit more. Taking him at his word, I bounced back up and, by some flabbergasting gravitational feat, spun all the way around to land on my feet again. I couldn’t tell you how on earth it happened, but I somehow did a somersault. My fellow flyers (one of whom studies quantum mechanics) could probably explain the ins and outs of the gravitational forces that spun me round, but I’d rather not know, lest it lose its magic. Once I’ve retrieved my stomach from the ceiling and the room has stopped spinning, I can’t wait to make the magic happen again.