What's in a name?

Before I embarked on my Year Abroad in Germany, I’d always wondered why I’d never met – or even heard of – a single German who shared my name, Rosie. I presumed the name was simply ‘not German’, just like British parents don’t tend to call their children Jörn or Silke.

I was wrong. It turns out that ‘Rosie’ is actually a rather loaded name in Germany. In 1981 the rock group ‘Spider Murphy Gang’ released a song about the ‘Skandal um Rosie’ (scandal about Rosie), an infamous prostitute in Munich. My flatmates told me this with great delight during our very first evening together, and proceeded to play the said song on repeat on YouTube. It has since resurfaced on numerous social occasions, during which my housemates gladly point out to our guests that this is ‘Rosies Lied!’ (Rosie’s song). Excellent.

However, there was a possible escape route from my ongoing embarrassment – using my full name, Rosanna. Curiously, I hadn’t heard this name an awful lot either, but I attributed it to the aforementioned reasons – it doesn’t sound particularly German, after all.

Once again, big mistake. Rosanna has also been sung about, this time by a group called ‘Wax’. This song does grant its namesake a few concessions – this “chick is one out of a million, she a grand prize” and she sports a “pretty face”. But beyond that, Rosanna is also a “freaky lil' mama” who “be trying to f*** all day”. As I weighed up the possible options, even Rosie’s undertakings sounded preferable to Rosanna’s jaunts.

But what could I do? Short of adopting a new name, I was in a pretty inescapable situation. I didn’t think that reflecting the personality of my new-found German alter ego would go down particularly well with my colleagues, so I’ve tried to take it with a pinch of salt and prove to them that not all Rosies share the murky connotations of their pop counterparts.

It seems it might be working – last week I even stumbled across a gingerbread iced nameplate at the Christmas markets here: a sign of my acceptance in the German community? I’d like to think so. 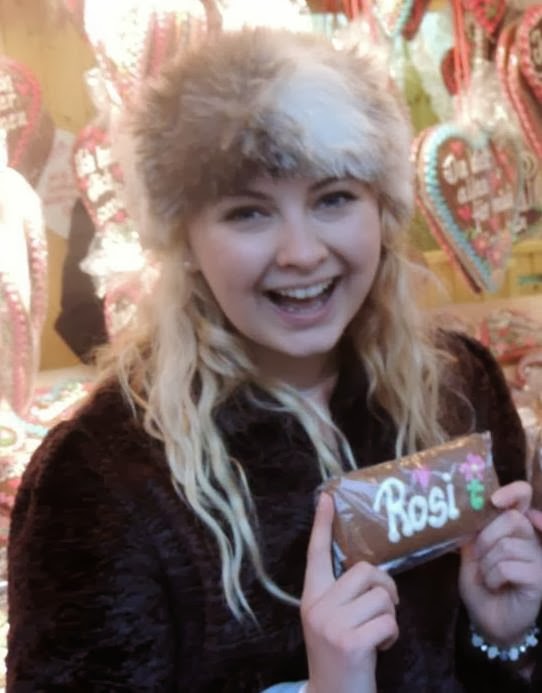