Shop without the drop?

For many shopaholics – myself included – summer and winter mean, on the high street at least, one thing: sales. It’s the time of year when women display an astonishing readiness to join queues at the crack of dawn; take on sweltering hot, overcrowded stores; and treat with uncharacteristic contempt those who threaten to beat them to it in seeking out their coveted item.

Yet if it’s such an unpleasant experience, why do so many of us put ourselves through it year after year? The answer is simple – if you’re lucky enough to find that heavily reduced, highly sought-after item, then all the upheaval becomes worthwhile. Sales serve as the ultimate justification to buy ordinarily expensive things, and many women would willingly put themselves through any amount of turmoil if the end result was, say, a pair of discounted Louboutins. 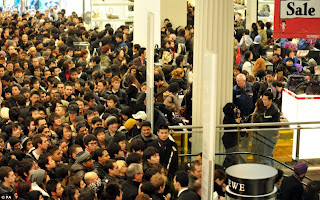 Chaos at the opening of the Selfridges sale.

But for some reason, this year I really couldn’t be bothered with it all. For starters, for every sales bargain I’ve had in the past, it’s almost always been counterbalanced by a major sales disappointment. Having waited weeks for a dress to go on sale, I’ll rush to a shop when their sale begins, only to discover that it hasn’t been reduced at all. Other times, such a dress might have made it into the sale, but the reduction is so minimal that my “it was in the sale, so it’s okay” excuse just won’t cut it. The final straw came last week – having finally convinced myself that a skirt with a fractional reduction could not be overlooked any longer, I caved in and bought it…only to return to the shop earlier this week to find it reduced considerably more. Life is so unfair.

And so, with this episode in mind, I was determined not to be out-witted on my next shopping trip. Certain that a particular top would be reduced again, I exercised a model amount of self-restraint and allowed it to pass me by – on this occasion at least. Returning a few days later, my intuition had indeed proved top-notch – it certainly had been blessed with a further reduction. And so, smugly grinning at my expert instinct, I rooted through the rail to find my size, only to find that someone else had beaten me to it. Sometimes, good times do not come to those who wait. And on those occasions, I want to tear all the clothes off their hangers and scream in annoyance.

Following this spate of misfortune, I resolved to start afresh, certain that a hallowed sales bargain was out there somewhere – all I needed to do was find it. I embarked on a brand new shop and was faced with rail upon rail of discounted clothes. The sea of low-price clothes seemed to be emitting positive vibes – at long last, I was certain that this was the place I would find my bargain, and alleviate my traumatic past experiences.

Yet nothing whatsoever took my fancy. There I was, nestled in a treasure trove of bargains, feeling completely uninspired. For some reason, the sight of an otherwise nice jacket squeezed on to a cramped rail and covered in bright red discount tags had put me off entirely. I left remarkably empty-handed – a sales first for me.

Shops are still marking items down in a last-ditch attempt to shift their final stock, but I’m remaining unmoved. Far more exciting is the imminent arrival of new-season collections, although I’m sure my subconscious bargain reflex will spring back into action soon and remind me that I ought not to buy that lovely sheepskin coat, since it will no doubt be reduced in the winter sale…

It’s not often that I hear a song that is so excruciatingly unbearable that I have to switch off the radio. Admittedly, I could probably still write a polemic on the dire current state of popular music, but I shall refrain from doing so on this occasion. Instead, I desperately need to have a rant about the ridiculous content of a song I heard the other day.

It started off with all the trappings of every other song you hear nowadays – a gratingly nasal voice combined with barely discernable pronunciation and contrived rhymes, plus a bit of rap thrown in for good measure.

But it got worse. Once I had got past the mandatory whines and groans accompanying the start of every line and had actually made out the lyrics, I could not help but exasperate at how dreadfully money-obsessed my generation is. Take the chorus for example:
I wanna be a billionaire so fricking bad
Buy all of the things I never had
Uh, I wanna be on the cover of Forbes magazine
Smiling next to Oprah and the Queen
It’s not even like the artist (whose name, Travie McCoy, doesn’t exactly invoke connotations of grandeur) aspires to wealth for estimable reasons. Later in the song, he boasts about all the girls he could “pull” and the “Mercedes” he would drive if he had pots of money. Where have charity and community gone? The youth of today – myself included – seems to be getting swallowed up by this egocentric materialism endorsed by pop culture.

I’m not just blaming money-savvy Travie for this attitude towards wealth either. There’s recent pop sensation Ke$ha, whose money fixation appears to be so pronounced that a dollar sign has managed to find its way into her name. Add to that Kanye West, who rapped about the ‘Gold Digger’ women in his life some years ago, or Destiny’s Child, whose celebration of the ‘Independent Woman’ focused almost exclusively on financial freedom, championing the individual who can “pay (her) own bills” and “buy (her) own diamonds”. Even ABBA had something to say about the “rich man’s world” they lived in.

So perhaps times haven’t really changed at all, and Travie’s effusions were merely a crude awakening for me. Nonetheless, I still have faith that money isn’t everything. There are still plenty of songs that celebrate love and friendship besides those that concentrate on money. The hoards of tents that descend on mud-ridden Glastonbury every year prove that many people are prepared to sacrifice luxury in favour of good music. And Sir Paul McCartney’s “money can’t buy me love” attitude seems to have rung true, if his divorce settlement is anything to go by.

But do you know what’s worst of all? The song is horribly, deploringly catchy. That doesn’t mean I’ll be buying it though – no no, I certainly couldn’t afford the download fee…
Posted by Rosanna at 03:17 No comments: