is the BBC failing the country?

Another shameless post of a Varsity review, folks. Enjoy. 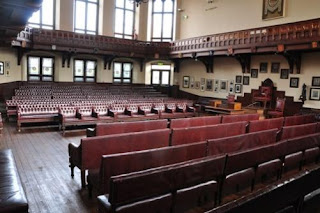 On the day I was due to attend a lavish black tie dinner with the speakers of this week’s Union debate, I received an email from Varsity asking whether I felt that my Union membership fees were being squandered on unnecessary extravagances. Although I was paying for the privilege, the number of invited guests and the liberal dispensation of wine certainly gave me pause for thought. Nevertheless, the new Union committee were quick to assure me that copious alcohol would engender a much livelier debate with more forthright speakers, and swiftly refilled my glass.
Having finished our handmade petit fours, we were whisked into the chamber and treated to an utterly engaging and at times outrageously witty debate. Outgoing Union president James Counsell opened the proposition’s argument that the BBC is failing the nation by citing several recent news articles guilty of ideological bias, and Theology student Sophie Lloyd responded with a solid defence of the BBC’s creativity and diversity. Roger Alton, executive editor of The Times, admitted that the BBC’s blithe complacency probably should be brought to check, although relying on stalwart favourites such as Bargain Hunt and copying ITV’s hit reality shows has admittedly been a successful formula thus far.
A rather disgruntled Jon Sopel, who felt his evening could have been better spent reporting on Alan Johnson’s resignation rather than speaking to a room of non-licence fee-paying students, undermined the proposition’s criticisms by quoting Alton’s hypocritically glorious praise of BBC news coverage whilst editor of The Observer. Despite Alton’s embarrassment, perhaps the biggest loser of the evening was the unfortunate timekeeper, whose desk-tapping efforts to halt the lengthy speeches of History of Art student Tom Davenport and Peter Bazalgette were met with amusing hand caresses and the gentle assurance, “Don’t be frightened, just relax and we’ll get through this together.”
By the end of the evening both sides had done exactly that – it was the witty exchanges between the opponents, rather than their convincing arguments, that were the highlight of the debate. And as I no doubt joined several other students in catching up on iPlayer’s latest offerings back in college, I realised that the BBC can’t be doing that bad a job after all.
Posted by Rosanna at 20:56