We came to Agadir in rather desperate need of sun. Fleeing flood warnings and the wet-weather weariness of home, as soon as we arrived at the hotel, we bypassed the staff’s endeavours to make our experience as leisurely and relaxed as possible – instead, we gulped down our glasses of mint tea, whizzed upstairs to our room and threw on our swimsuits before running to the beach as only those who have been deprived of sunshine for months on end can. Two hours later we returned, utterly frazzled and red as lobsters, but blissfully happy. This sun would be ours for the whole week, and we weren’t going to let a single ray of it go to waste. 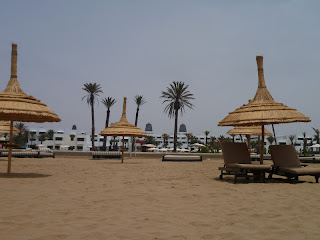 Our hotel was situated at the far end of the Corniche, a long promenade along the beach lined with shops and (rather touristy) restaurants. Buoyed by the warm evening sunset, on our first evening we decided to walk the entire length of it to find a restaurant for dinner (our exploratory enthusiasm gradually waned over the duration of the stay and these sunset strolls were soon replaced by twilight taxi trips to our restaurants of choice). We ended up in the marina, apparently the trendier part of town, where we feasted on fresh fish followed by a cocktail in a café perfect for people-watching. Our return walk to the hotel was full of romantic promise: barefoot paddling in the sea, a backdrop of a hill lit up with its ‘Allah, the Nation, the King’ words, the prospect of a stress-free week together in glorious sunshine. Unfortunately, this hope was promptly extinguished as all lights were switched off at midnight and we were left to our own devices to return to our secluded hotel. No matter: seaside snuggles were replaced with apprehensive huddles as we clung to one another and attempted to find our way back through the darkness. 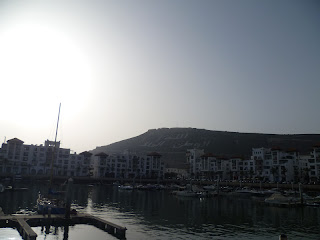 Back at the hotel, my boyfriend amused himself watching the Arab music channel (think women on horses and slightly overweight men smiling endlessly in a rather unsettling manner), whilst I explored the room’s offerings (a tray full of macarons! A pillow menu! A bed wider than it is long!). Soon the dreamy atmosphere overcame us, and we drifted off for hours on end.


Breakfast was an opulent spread of traditional Moroccan food and continental treats which, in our eagerness to drink every last drop of sunshine, we took outside. Having noted on my previous night’s scan that our bathroom had only a screen for the toilet area, I passed on the local curry soup and instead tucked into a colossal stack of crepes freshly made by a somewhat bemused-looking chef who was perhaps used to guests whose appetites are quelled by the heat. Not us, monsieur.


Sufficiently fuelled for a strenuous day of sunbathing, we plodded off to the beach. As the sun dreamily glittered its way through the day, so days melted into one another as we passed the time snoozing, sunbathing and splashing in the sea. My boyfriend had so much fun jumping in the waves that he dislocated his shoulder, and I became so absorbed in my books that I overlooked the extent to which the sun was absorbing me. No matter, both problems were easily assuaged by the loving staff in the on-site spa and hammam, who were on hand to slap on soothing lotions and perform miraculous massages to alleviate the pains of luxury. 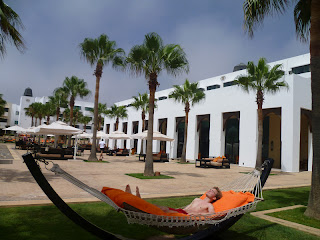 Whilst certain quirks about the hotel charmed us – we were hypnotised by the non-stop nodding of the guitar player in reception, and every day we were treated to a sculpture that the housekeeping staff had fashioned out of our pyjamas – we were occasionally disappointed by the slow service and inattentiveness of the staff. When we took it up with the management, we returned to a bottle of Laurent Perrier and platter of fruit awaiting us in our room. The problem was soon fizzled away and forgotten. From then on the staff were charming, always remembering our preferences, even when we’d have preferred them to forget (in a moment of health-conscious folly I asked for mint tea without sugar at breakfast one morning, and on every day that followed the same bitter broth arrived to remind me of my mistake). 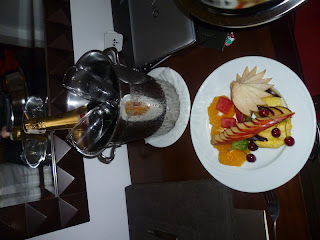 Agadir is a place to relax, as its numerous restaurants and cafes geared towards visitors suggest. We tried to escape the more touristy areas and enjoy authentic meals when we could, and although we were occasionally stared at by passers-by or considered crazy by our hotel staff for wanting to visit the less salubrious districts of the city, we certainly got a taste of the local flavour in the form of gigantic tagines, mountains of cous cous, heavenly pastries and – my favourite – exceedingly sweet pastillas (pigeon-stuffed pastries topped with icing sugar and cinnamon, a sweet-tooth’s dream). My boyfriend was even daring enough to have his hair cut at a local hairdresser’s, where the barber assured us he would take extra care as he was “cutting Leonardo DiCaprio’s hair”. (The flattery still hasn’t worn off.) Nevertheless, watching the chaos of an evening unfold before us as taxis raced past and street vendors sold sizzling kebabs whilst we indulged in fresh fruit milkshakes and shisha in streetside cafés was, in our opinion, a more diverting pastime than the dubious delights of the tribute band that played in our hotel each evening. 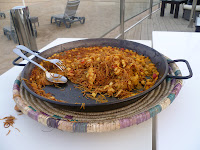 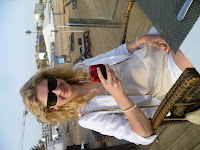 And so we returned to a dreary, soggy England, outwardly glowing both in colour and character. Whilst our pasty compatriots poked fun at our slightly ridiculous red noses, we couldn’t have cared less. For a week we had had no work, no wet weather, and no worries. In my opinion, looking like a lobster was a small price to pay for a perfect escape.
Posted by Rosanna at 03:36