Our final day in Paris was one of mixed emotions. It was the day of the Euro 2012 Germany-Netherlands clash, and Tessel, as a loyal Dutchie, was suitably attired! We spent a lovely morning admiring Monet's Waterlilies at the Orangerie Museum and chewing our way through countless salted caramels before having lunch, lusting after glitzy ballgowns, and sharing yet another Mont Blanc (well, we were in Paris after all) at Galeries Lafayette. We then had a look around the Opera Garnier – which is absolutely stunning – and did some window shopping along the Avenue d’Opera. 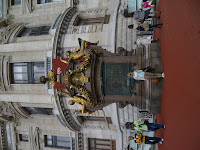 And that’s when the drama started. We went inside a lovely-looking chocolaterie and after sampling their heavenly marshmallows I decided to bring some back as a present for my mum. But when I went to pay, someone had taken my purse from my bag. To be honest, cancelling the cards and reporting the theft at the police station wasn’t too stressful. More than anything, I found it rather unsettling that someone had rummaged through my bag without me even noticing, and deeply frustrating that I had lost so many cards that were important to me but of no use to anyone else – my university card, for example, and gift vouchers that could only be spent in England. I’m still going through the process of getting everything replaced, and it wasn’t even worth making an insurance claim as there would have been too high an excess to pay. Sadly, I’ll just have to put this down to experience and be more careful when travelling in future. It was a horrible way to end such a wonderful stay, but I won’t let one person’s dishonesty ruin my trip – despite feeling a little disheartened, my memories of Paris are still absolutely fantastic. 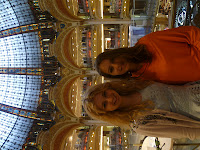 Having spoken my best French at the police station (thank goodness I am studying a languages degree!), a stiff drink was most certainly in order! We took shelter from torrential rain at a traditional French bar before moving on to a Dutch pub to watch the game. Unfortunately, neither of us had anticipated quite how many loyal Dutch fans would be in Paris at the same time as us, and we could barely squeeze through the door. A rather amusing few minutes later, in which the pair of us, clad in orange mini-dresses, ran frantically around Paris’ nightlife district searching for a bar showing the football (in Paris, it seems these are few and far between) – to the amusement of several onlookers – we finally found a quieter place, only for The Netherlands to lose the game. I suppose luck wasn’t on our side that day!
Posted by Rosanna at 00:04