Cinderella, you shall go to the ball

Last night I went to the Fitzwilliam Winter Ball, and I survived. Which, considering the sub-zero temperatures, my ridiculously inappropriate five-inch heels, and my lack of sleep in the preceding days in the mad rush to finish end-of-term assignments, was no mean feat.

Admittedly, I was helped by the copious cocktails sustaining my vodka jacket, and, in keeping with the Willy Wonka theme, the unlimited fudge, waffles, marshmallows, falafel, doughnuts, jelly babies, chocolate fountains, gummy bears, pineapple, sausages and mash, cupcakes (have I bored you yet?), fajitas, candyfloss, lollipops, strawberries, popcorn, sherbet, sugar mice, and cheese and biscuits on offer certainly ensured energy levels remained at their optimum sugar-fuelled intensity. And regular Pro Plus-popping probably didn’t go amiss either. We Cambridge students sure know how to party.

Nevertheless, there were a few slight hiccups. At the cheese table, the distressed voice of one slightly less cultivated attendee was overheard despairing, “Jemima, they’ve run out of Babybels! What are we to do?!” The vodka bar also ran dry all too soon, although the barman did offer a sincere apology: “I can give you a mixsh of Baileysh, Archersh and shider inshtead? Thish ish the lasht drink I’m sherving thish shift; wooo let’sh partaaaay!” No prizes for guessing where the vodka went there then. Poor lighting in the ‘room of eatable marshmallow pillows’ also caused its fair share of problems. One female student was appalled to discover the man she’d been caressing was actually a life-size cardboard cutout of Willy Wonka, and a number of girls eager to take advantage of the free hair and make-up ‘touch-up’ services on offer left bearing an alarming resemblance to oompa loompas. Although by that point most people were so intoxicated by the ‘fizzy lifting juice’ being served that hardly anyone batted an eyelid. 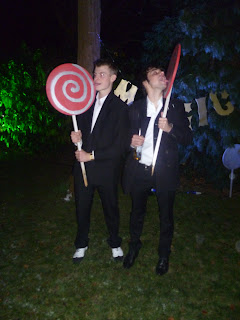 We tried to take these lollies back with us, but the security guard stopped us. We protested that we wouldn’t use them as instruments of violence, but he obligingly pointed out, “Lads, that’s how accidents happen.” Next time we’ll be more sly.
Whilst the steel drums playing Christmas carols didn’t quite get the rapturous reception the organisers had hoped for, the rest of the music didn’t disappoint. Unfortunately we arrived too late to catch main act Natty, but the cool sounds of DJ Kayper more than compensated for the loss. Other rooms featured top local acts such as jonocary and Justin Woolf which were bolstered by impressive sound and lighting systems, and for those who wished to escape the thumping basslines there was even a silent disco upstairs.

For guests wanting a break from the music, there was a casino, karaoke, inflatables, a photo booth replete with comical props, as well as shisha for those who could brave the freezing temperatures outside. Even the actress who played Verruca Salt in the first ‘Charlie and the Chocolate Factory’ film was installed behind a desk with a giant name tag above her that initiated awkward conversation with drunk students. Clearly, no aspect had been overlooked by the ball committee.

Dancing the night away in the suitably-named ‘Rock Candy Mine’ (Fitz’s basement rooms), time flew by and we almost missed the survivors’ photo in the early hours of the morning. As we huddled on the snowy grass with the hardcore few who had also survived the experience, a chorus of carols broke out. It may only be early December, but as Michaelmas term draws to a close, it feels like Christmas here already.

Photo taken, a voice informed us that breakfast was now being served. My chocolate-abused stomach gave an uneasy lurch. I felt more like Augustus Gloop than Cinderella, but I had survived my first ball nonetheless. If only there had been a great glass elevator to make the walk back to college on the frozen paths more bearable. Alas, I suppose we can’t always have everything.

EDIT: This post was published on Varsity online, hurrah!
Posted by Rosanna at 03:05