Some might say I am mad. Others might say I am a hardcore party addict. Personally, I prefer to think myself a budding socialite among the Cambridge elite. Whichever category I fall under, on Friday night, feeling somewhat unsprightly after a mere two hours’ sleep following the previous evening’s ball antics, I attended another ball.

Selwyn College referred to their event as the Selwyn Snowball, and the name could not have been more apt for the frozen occasion. No amount of mulled wine and mince pies handed out by patient stewards was able restore the feeling to our numb toes as we queued to get in, and the chilled vodka jellies laid out on top of the ice bar were passed by in favour of more warming grub on offer at the ‘Angel of Islington gastropub’ as we entered. Ents offerings continued the snowy theme, with music by the ‘Antarctic Monkeys’ proving especially popular. 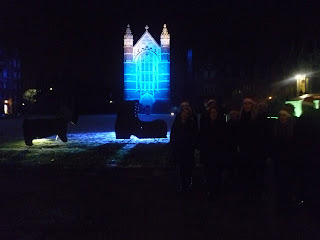 I pitied the poor all-girls' A Cappella group singing outside in the cold. I hope they had their thermals on, cos it was freeeezing.
The theme of the ball was Monopoly, and excellent decorations – the entire ceiling of the main hall was covered in a giant Monopoly board – combined with themed cocktails (the luminous green Mayfair Martini being a particular favourite) transported guests to 1930s London. However, the organisers might have got a little too carried away in the Monopoly mindset by establishing a strictly enforced one-way system that made movement from place to place a rather exasperating process for guests.

For those needing to rest after this constant meandering, amusing caricatures were on offer in the ‘Birthday Party’ room, and the ‘Free Parking’ area enjoyed unexpected popularity when one of the films on show there got stuck and played a diverting sex scene repeatedly until a highly embarrassed organiser removed the tape, to the widespread disapproval of a growing faction of male guests.

Despite homemade doughnuts and giant chocolate fountains being available to satisfy midnight munchies, their location in outdoor marquees on the ‘Old Kent Road’ prompted most guests to stick with the Piccadilly Punch flowing from the indoor ‘Waterworks’. Unfortunately this meant that many of the bars ran out of certain spirits and mixers prematurely, and staff members were forced to rely on their Cambridge-bred ingenuity to create imaginative alternatives such as rum and cranberry juice. Delicious.

As the night drew to a close and snow fell on the college grounds, a stampede of chilly guests descended on the unsuspecting cloakroom staff, whose system was so chaotic that many guests (myself included) were forced to enter the maze of garments and rummage through the heaps of coats in search of their own. I wonder whether the banker might have been able to cash in on the wealth of property left over by guests who didn’t share my luck...

Despite this Mayfair madness, we’d still had a capital night of entertainment in Selwyn’s version of 30s London, although the black cabs waiting outside to transport us back to the cosy environs of our college rooms were a welcome retreat from the frosty outside.
Posted by Rosanna at 07:14